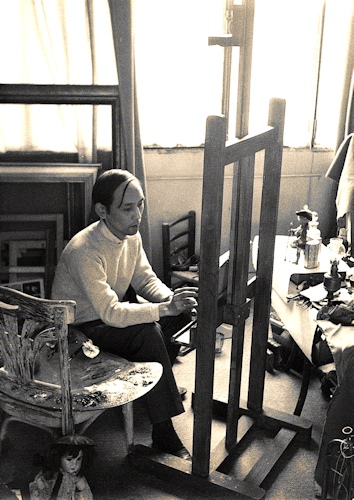 This website was designed to comprehensively introduce the achievement and personality of artist Eikichi Iwata (1929-1982), as well as to be a community place for the owners of Iwata’s works.

Iwata moved to Paris at the age of 28, where he lived and worked until he passed away at the age of 53. In Paris, thanks to his fluent French, he closely related and associated with many talents and experienced many local practices. His admiration and deep understanding of European cultures, namely the traditions of painting, allowed him to create and express his own original and rich poetic world.

The terms that best define his paintings are “Realité” and "Trompe l'oeil". His realism is not simply painting realistically or pursuing the potential of painting a flat surface, but it is trying to make the viewers feel various perspectives in what is depicted both visually as well as in a deeper meaningful sense.

However, the number of paintings by Iwata is rather limited, partly due to his relatively short life, and partly to his time-consuming creative process because of an extremely detail-oriented expression. Having said that, his art is widely appreciated and now owned in various countries, not only in France, but also in other European countries and even in the US.

We look forward to exploring together Iwata's whole unknown world through this website.